Su Jin Lim was a student at Ashcan in 2009, and is a recent graduate of Parsons Illustration BFA program. Each day that Sujin was here at Ashcan she made me laugh. She has a dramatic, honest and unpredictable character that I love. She definitely has real star quality. Between that and the appeal of the work she was making, even then, I knew she was going to be a success in no time.  In Bologna, Italy, Sujin’s “Fire” pieces were chosen for exhibition in the children’s book fair in 2011. She’s already shown her work in Hong Kong, Singapore, New York, Miami and Seoul. She had her first solo show in Chelsea when she was just a junior at Parsons. I was there and it was a great show with a huge turn out.

You can see more of Sujin’s work here: http://purityforkids.com  I like that she’s not afraid to use glitter, and buttons and lace, and I love her titles (MISS YOU, YOU!) almost as much as I do her sensitive, playful work. 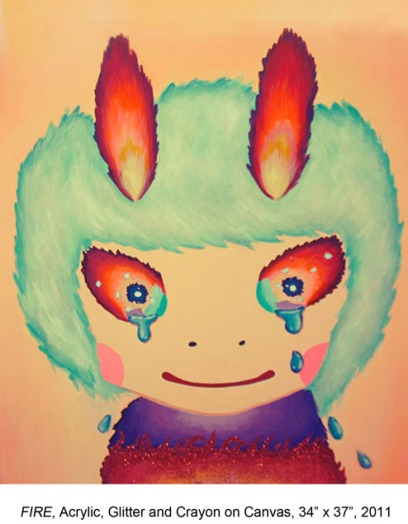 “Lim is an artist who deals with seemingly simple pictures and emotions, but she is highly effective in making them stand for things larger than they are. In doing so, she is a true artist.” Jonathan Goodman, Art Critic

Hayley: Where did you study?

Sujin: I graduated from Parsons The New School for Design 2013 Spring.

I am currently active in my country Seoul, Korea. And I also exhibit in Hong Kong, Singapore and New York.

Hayley: What was your major? 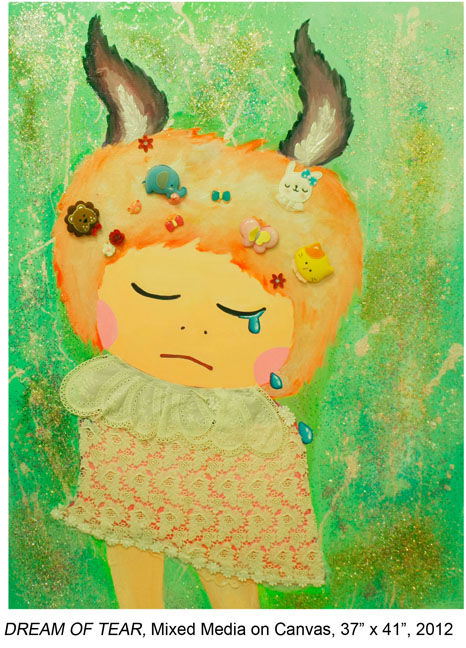 “To her credit, her images memorably display some of the hardships of being human, with figures whose colorful details and simple vulnerabilities remain in our minds.” Jonathan Goodman, Art Critic

Sujin: There are many international people at Parsons. I had the opportunity to be taught by professors from many different countries. And every student there had different views and concepts, So I was able to learn about various fields.

Also, There are many famous instructors teaching at Parson, and most of them teach various skills.

Hayley: When were you a student at Ashcan Studio & what was your experience?

Sujin:  I was at Ashcan Studio from the summer of 2009 until the Winter of 2009. My experience was that I learned skills in all different types of media. For example, there are many different classes at Ashcan Studio like figure drawing, oil painting, collage, fashion modeling, still life, mixed media, and 3d class. I think it was very good for learning before going to art school.

Hayley: What is the most important thing you have learned art an artist?

Sujin: As an artist, I always of think who am I? I am influenced especially by my childhood memories and by unforgettable experiences in my life.

Hayley: You are invited to take part in exhibitions quite often. Can you tell me about that experience, how it started and where you are now? 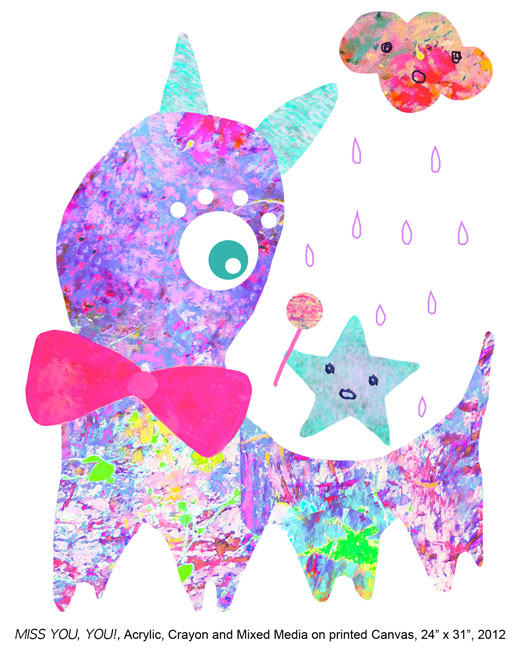 Hayley:  You have a very clear and consistent aesthetic as an artist, where did that come from and do you think it’s a factor in your success as an artist?

Sujin: I think artists have to be honest characters. I have always based my work on my emotional feelings and how they change everyday. That’s why my main character seems to be a crying baby girl. Also, I like to communicate to pure-hearted people (children’s book artists and children) and I love to read children’s books.

Hayley: Do you have advice for artists who want to participate in gallery shows?

Sujin: Each gallery has a different style. The most important thing is that there is a match between an artist’s style and the gallery’s style.

Hayley: What are your goals?

Sujin: I think I should learn more and more because I do not have all the confidence that I would like to have yet. I will learn from various influences in my life and exhibit various places around the world. Also I want to communicate with all of the pure-hearted artists in the world.

“In a novel manner, Lim finds pathos in the midst of her child-like figures, who innocently enact the rituals of play in an attempt to offset the anxieties of human exchange.” Jonathan Goodman, Art Critic

“Lim is particularly good at maintaining her cast of characters in scenarios that involve pathos but also considerable amounts of love.” Jonathan Goodman, Art Critic

Ashcan Studio is a Portfolio Preparation School, helping thousands of art students get into the top BFA and MFA Visual Arts Programs We've created this blog to help you too, by offering weekly Updates and Tips on how to make an outstanding Art Portfolio and how to apply to Visual Arts Programs We offer our knowledge about: How to make art work admissions counselors will love Tips on how to find your unique creative voice Information on the best Art Schools Portfolio Examples What to do when you fell like your works not good enough Step by Step guides on everything Art School and more...

APPPLY TO SCHOOL WITH CONFIDENCE 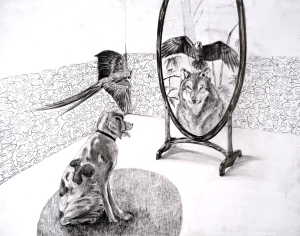